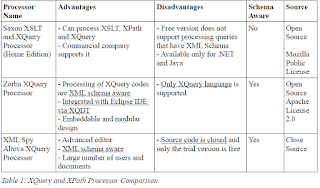 Introduction
Once you have the data in hand, it is important to be able to query and serve it according to users' needs. By the development of internet huge data sources are created and started be exchanged between different web applications. Since XML is the popular, easy and structured way of exchanging data across web sites and applications, querying the XML data becomes a major issue. Therefore W3C[1] come up with solutions to this problem; XPath and XQuery are two of those querying languages that are defined by the groups in W3C. XPath is a subset of XQuery and XQuery uses the XPath expression syntax. In order to compile the code that is written in these languages, XPath and XQuery processors are developed. In this survey, we will discuss three XML processors and compare them.
Saxon XSLT and XQuery Processor (Home Edition)
Saxon[2] started as an XSLT 1.0 processor and only supported language was Java. After the release of XSLT 2.0 and XQuery 1.0, Saxon comes up with two different versions; Saxon-B and Saxon-SA. Saxon-B version is the basic version of XQuery processor which is free and open source with MPL[3]. Nonetheless, Saxon-B does not support XML schemas in its queries. Saxon-SA(schema available), which is a commercial product, can process the query with XML schemas that are used within the query. In the latest version of Saxon which is 9, both .NET and Java languages are supported. Both XPath(1.0, 2.0) or XQuery(1.0) can be processed by Saxon 9.
Zorba XQuery Processor
Zorba[4] is a modular and embeddable XQuery processor. Although, it supports only Xquery(1.0) XML query language, because of its modular design in its architecture it can be used in my possible areas(i.e. Smartphones, browsers). The source code is in C++ and available as an open source library with ALv2[5]. Live version of Zorba gives users the ability of testing their code on the processor without installing any software. There are XQuery Development Tools which let Zorba XQuery processor to integrate with Eclipse[6] IDE. By this way users can use Eclipse as their XQuery editor. Most importantly, Zorba is XML schema aware and can run the queries that contain XML schemas.
XMLSpy Altova XQuery Processor
XMLSpy[7] is one of the most popular XML query processor which supports both XQuery and XPath queries. Company has a user friendly and advanced editor for XQuery and XPath queries. Trial version is free to download and use but the source code is not open to public. XML schemas within the query are successfully processed with XMLSpy. In addition to the editor, it has XQuery debugger, XQuery profiler and XPath analyzer which may help developers while writing complex queries. Application is only compatible with Windows. The user interface supports two languages; English and German.
Conclusion
In conclusion, Saxon-B supports both XQuery and Xpath but it lacks on with XML schema awareness inside the queries. XMLSpy understands XML schema within queries and it has advanced editor features; however, processor is not modular and integrated into application. Since the application is not open source, users will not be modify it if needed. On the other hand, Zorba is XML schema aware, open source, modular and integrated with free IDEs. If the queries will be written in XQuery only then Zorba is the best choice in between these three processors.(See Table 1)
xpath xquery

Anonymous said…
the most powerful and advanced XML/XPath processor is vtd-xml, nothing comes close

Anonymous said…
Altova also makes its schema-aware XQuery, XSLT, and XML parser engines available for free in AltovaXML, which you can integrate in your applications. These are the same engines that drive XMLSpy.

John Snelson said…
You should check out XQilla - it's open source (Apache License v2), schema aware, written in C++ and is working on XSLT 2.0 support.

Christian Grün said…
One more implementation.. You are invited to try BaseX, which also supports the W3C Full Text and Update extensions: http://basex.org/
January 12, 2010 at 1:40 AM

Andrew Spyker said…
You should add the IBM implementation to your list:

Joshua Smith said…
Thanks for such helpful review. If you need to insure your house, try cheap homeowners insurance
August 10, 2011 at 6:48 AM

Popular posts from this blog

3 Must Haves of a Status Report

If you are a project manager, status report is the vital part of your communication to the leadership and audiences interested in your project. The purpose of the status report is not to drive a project with stakeholders. Project planning and driving should be handled separately. Status report has a single purpose, describe the status of the project. That's it. Here are the 3 attributes a status report should have. 1. Brief and Clear A status should be short and well thought. Remember what Mark Twain said, "I didn't have time to write a short letter, so I wrote a long one instead.". If your status report is long and hard to follow, it means you did not think enough on it. If you have not spend time on your status report, why would other people spend more time on your status report to understand. Even worse, if they read and try to decipher what you have written, each person may interpret it differently. Therefore, keep important updates at the top and use clear
Read more

- September 05, 2016
IN TRANSIT AT REST SSL/TLS Server Side Managed Keys Client Side Managed Keys S3 (SSE-S3) Each object is encrypted with a key. Amazon encrypts the key with a master key, which rotates regularly. AWS Key Management Service (SSE-KMS) Allows you to audit trail (who and when used the key), extra cost and you manage the master key. Customer provided (SSE-C) User manages the keys but encryption done by Amazon User encrypts the data on client-side and uploads to S3
Read more

- June 14, 2009
Alright, today I would like to work a sample web site and browse it not only from my Android Emulator but also from my Android G1 device. Since I did not make the web site public yet, I need to play with "hosts" file in order to direct specific url to my specific intranet IP on Android browser. The steps that I follow to accomplish my goal are provided below; For Android Emulator; 1. From the terminal invoke the adb command with remount option otherwise you will get "failed to copy 'hosts' to '/system/etc/hosts': Read-only file system". adb remount 2. In the terminal pull the default hosts file from /system/etc/hosts or /etc/hosts which is the symlink of the file not only for backup purpose but also to get the file to modify. adb pull /system/etc/hosts /home/player/hostBackup/ 3. Get a copy of the the hosts file in your computer and modify it according to your needs. 4. Now we can push the file directly to the emulator. adb push /home/pla
Read more